To the USA and back!Three mechanical engineering students are impressed with their semester in California and Colorado 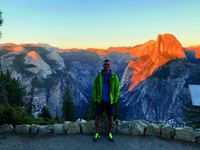 Jan Groß in Yosemite National Park during his exchange semester in California. 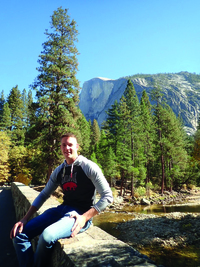 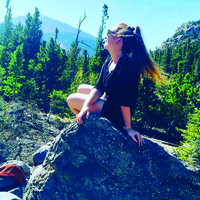 Franziska Steidle at a trip to the Rocky Mountain National Park in the north of Colorado.

The USA for an entire semester. For many a dream, but a reality for students in the Mechanical Engineering / Production and Management degree programme. As the first USA-outgoings of their degree programme, they studied at two partner universities: Holger Havlin and Jan Groß in California, Franziska Steidle in Colorado. The students of Aalen University and their academic dean, Professor Dr. Harro Heilmann, report about their experiences in the USA.

“Holger and I spent the first three days in San Francisco, before the big ‘Orientation Week’ started at the end of August”, explains Groß. During their exchange semester, both young men lived directly on campus at the private “University of the Pacific” in Stockton, which is about 130 kilometres east of San Francisco. Their classmate studied at the public university of technology, “Colorado School of Mines” in Golden, some fifteen kilometres west of Denver. The prospective engineer lived together with her roommate in an international dormitory close to the campus. All three students used the Baden-Württemberg Scholarship to finance their semester abroad.

The students in California were soon greeted with “hey, the Germans!” by the international student organisation “Theta Chi”. During their internship semester, the two mechanical engineering students had already met an American, Gavin. Through Gavin, who also studies at “University of the Pacific”, they met the organisation.

The time-intensive workload is a huge difference between lectures at American and German universities. The two students received homework and were graded for participation and attendance. It is normal to take multiple graded tests during the semester. “During the week, most of my classmates were mainly studying”, remembers Steidle. “The intensive support in the USA is definitely great, but our German system develops graduates who can organize themselves”, says Prof. Harro Heilmann, who also had many years of experience in the USA, established and coordinates the academic relations with both US partner universities.

The three students can take away a lot from their experiences in both systems. Specifically, the German system encourages independence: “You learn to organise yourself and prioritise assignments”. The American students certainly had stress from exams. One also cannot forget the high costs of studying in the USA. With a smile, the three remember sleeping areas put together in the library during examination periods, the “midnight breakfasts” and massages, all to motivate the stressed students. “The Americans make an event out of everything”, says Groß. The Americans came across as open and helpful, ready to include others, but the cliché that Americans are very unreliable was confirmed in some cases. “But you learn to deal with it”, said Halvin.

How was communication otherwise? “The barriers to speaking English were lowered. You can get in very quickly”, explains Groß. “And for the written assignments, we always had enough time for preparation”, adds Steidle. Halvin laughs: “You could say we got by just fine this semester”.

While across the pond, the students took the opportunity to go sightseeing and often used the weekends to schedule trips. For the student in Colorado, she often went camping with other exchange students through Colorado, with a rental car to the Rocky Mountains, to the Mesa-Verde National Park, to the snow-covered Yellowstone Park and by airplane to San Diego on the south tip of California.

For the two men, they scheduled trips to Calaveras Big Trees State Park, the woods with redwood trees, as well as a trip to Yosemite National Park, among others.

They returned home punctually by Christmas, but the fascination with America continues, as all three plan to return in 2019. Groß and Halvin will come back to California with their family and friends to show them where they spent their exchange semester, and Steidle will visit a friend in Mexico. But first come their bachelor theses.

“With stays abroad, you create cultural and regional memories, which can inspire and inform your life”, says their professor. In the fall, he flew with colleagues to the USA to hold presentations at partner universities and build further partnerships. “The USA is already a different world”, summarizes Halvin. “But as Germans, you can settle in well”, adds Groß. All three can only recommend spending an exchange semester in the USA!