Sweet Home AlabamaInitiation of exchange programme with the US state 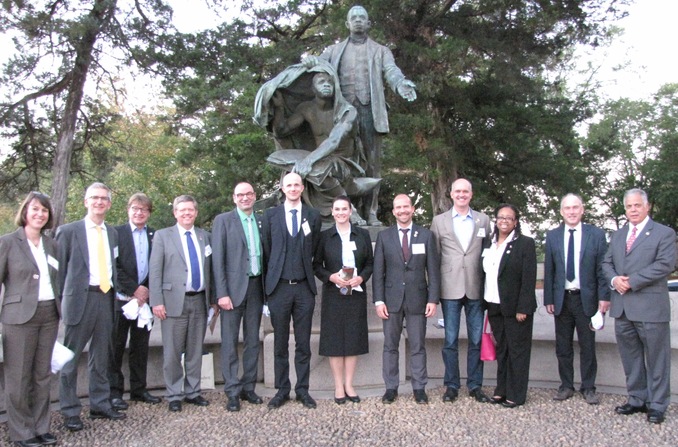 Prof. Dr. Harro Heilmann (4th from the right.) is pleased by a successful delegation trip to Alabama. There, co-operations were initiated with several universities.

For students of Aalen University who want to spend a semester in the southern United States, this could soon mean “Sweet Home Alabama.” Prof. Dr. Harro Heilmann, dean of studies and international coordinator of the Mechanical Engineering/Production Management department, travelled together with eight other representatives of Baden-Württemberg universities to Alabama to build co-operations with the universities there.

The Baden-Württemberg delegation visited several universities in the state, located in the south eastern US, where many companies from the Hi-Tech and automotive industry are located. For example, Daimler and Hyundai built large automotive production facilities in Alabama and Airbus is also represented with an assembly plan as well as with a development centre.

As with universities of applied sciences in Baden-Württemberg, particular emphasis is put on the engineering-sciences area at Universities in Alabama.

Consequently, many opportunities arise on the student and research levels. For enrolled exchange students, it is particularly attractive that it is significantly easier for them to receive an internship than it is in Germany. With the proximity to Daimler and Airbus, it is also possible for the students to write their bachelor thesis in the USA which would also be recognized by Aalen University after completing a semester-long internship.

“’German engineering’ is a seal of quality in the USA. The hosts were impressed that for the past nine years, Aalen University was the strongest research university in Baden-Württemberg. This increases the willingness to engage in a partnership programme,” says Professor Dr. Harro Heilmann. In the coming years, agreements will be made to exchange students of both countries. Professor Heilmann is confident that by winter semester 2017/18, the co-operation programme will stand, and the first exchange students can make their way to the southern US states.