Collaboration with South Africa: Momentum for the Next 20 YearsAalen University receives delegation from the Central University of Technology 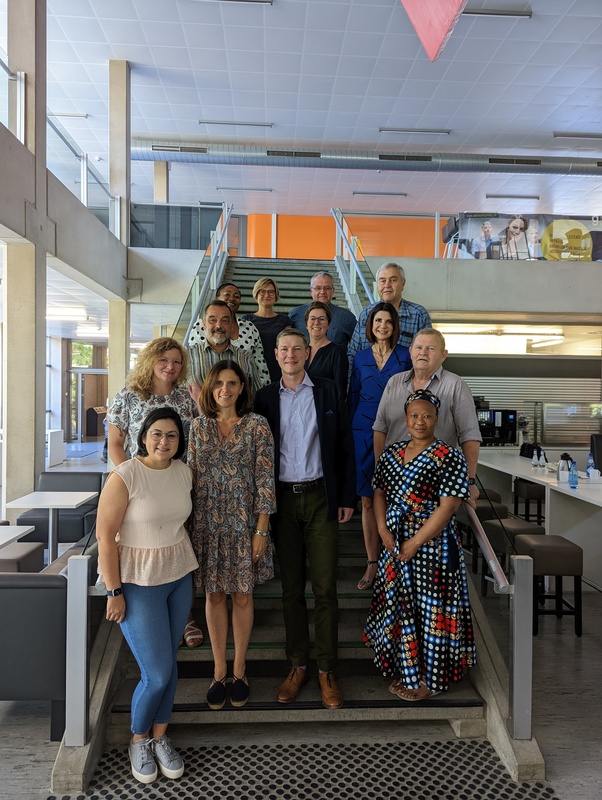 A delegation from the South-African Central University of Technology on a visit to Aalen University. Photo: International Relations Office

The CUT’s senior staff came to Aalen to ensure that the next twenty years are as successful as the last. The partners from South Africa led promising and future-oriented discussions together with professors as well as university employees and representatives of the Graduate Campus that aimed to deepen and expand on present collaboration reaching across faculty boundaries. Vice president Prof. Dr. Andreas Ladurner officially welcomed the delegation while Prof. Dr. Ulrich Holzbaur and the International Office supervised their visit. Holzbaur, who has been cultivating the partnership from the very beginning, is an honorary professor at the CUT and has contributed substantially to mutual activities. During the visit, he presented the two current projects: an entrepreneurship simulation game and a Geopark in a meteor crater. The guests also presented their activities, and substantial future projects were able to be planned in many one-on-one conversations.

Aalen University and the CUT are celebrating the 20th anniversary of their partnership this year. As part of the anniversary celebration in the past months, a series of workshops took place that were carried out together by professors as well as employees from Aalen and the CUT. This will come to an end in late September with a hybrid gala. Furthermore, Prof. Dr. Holzbaur will be working together with Prof. Dr. Steffen Schwarzer, who will be taking over tending to the partnership with South Africa, on a return visit to the CUT to solidify the partnership. “I look back with nostalgia but also pride on the past 20 years of cooperative work, and I am confident that countless projects will be put together in the next years and an intensive exchange will take place,” explains Holzbaur. So far, 160 students have taken part in an exchange with the CUT in Bloemfontein, making it Aalen University’s strongest exchange program with a South African university. “An intensification does not only benefit the travelers, but also contributes to an international atmosphere at the university,” emphasizes Holzbaur.