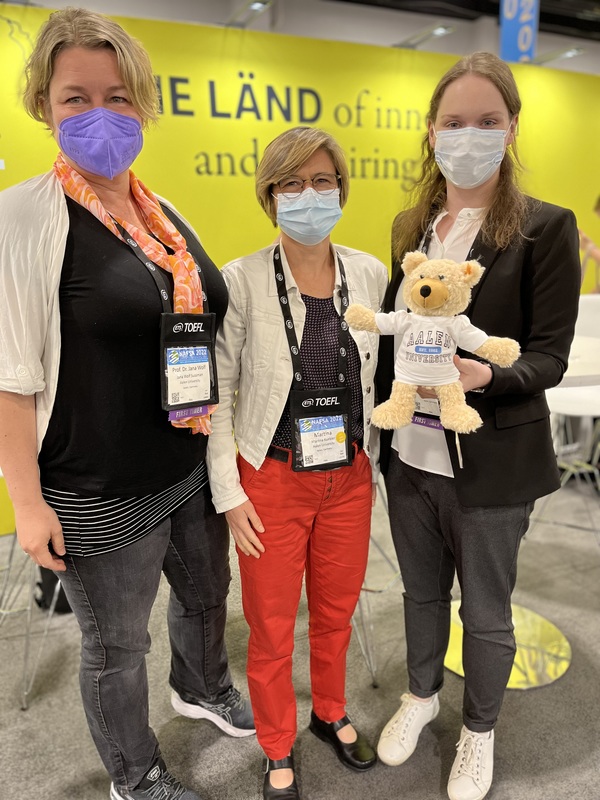 The INTENSE project team at the BW_i booth "THE LÄND of innovation and inquiring minds" in Denver, USA. Photo: Private.

To re-establish relationships with partner universities on a personal level after the Corona pandemic, a team from the INTENSE project traveled to Denver in the USA for the NAFSA international education fair. The INTENSE project is funded by the German Academic Exchange Service (DAAD) in the HAW.International program and is concerned with the further internationalization of Aalen University.

The aim of the Aalen project team at the conference, which was held in Denver for the first time since the beginning of the pandemic, was above all to maintain contacts with international colleagues, exchange information on current higher education policy issues and plan joint activities to be implemented in the near future. Among other things, the university team was able to meet with 17 of its partner institutions during the conference in order to revitalize and further expand global partnerships. Aalen University currently has 137 partnership agreements with educational institutions in 56 countries worldwide. Exchanges take place at various levels: from student outreach through joint research and teaching to new virtual exchange formats. Although mostly U.S. partner universities were in attendance, partner institutions from Latin America, such as Argentina, Chile, Mexico, Costa Rica and Peru, as well as European partners from Sweden, the Czech Republic and Ireland, were represented at the education fair as well.

The well-attended NAFSA is a networking forum and one of the world's largest trade shows in the realm of international higher education, exchange and travel worldwide. NAFSA 2022 followed the motto "Building Our Sustainable Future". Baden-Württemberg International (BW_i) organized the joint booth "Baden-Württemberg Universities" to strengthen the visibility of the state at NAFSA and to enable a platform for discussion for the cooperation partners. Alongside 13 other Baden-Württemberg universities, Aalen University, represented by the project team, was also part of the BW_i booth „THE LÄND of innovation and inquiring minds“.

NAFSA is truly an efficient tool for partnership building and networking in general. "In just three days, we can look back on numerous intensive and promising discussions on partnership development," was the conclusion of the INTENSE project team consisting of Prof. Dr. Jana Wolf as well as Martina Kübler and Katrin Zinser from the International Relations Office. The DAAD-funded INTENSE project in the HAW.International program pursues the main goals of promoting an international campus at the university, developing new exchange formats, and a strategic cultivation of partnerships.