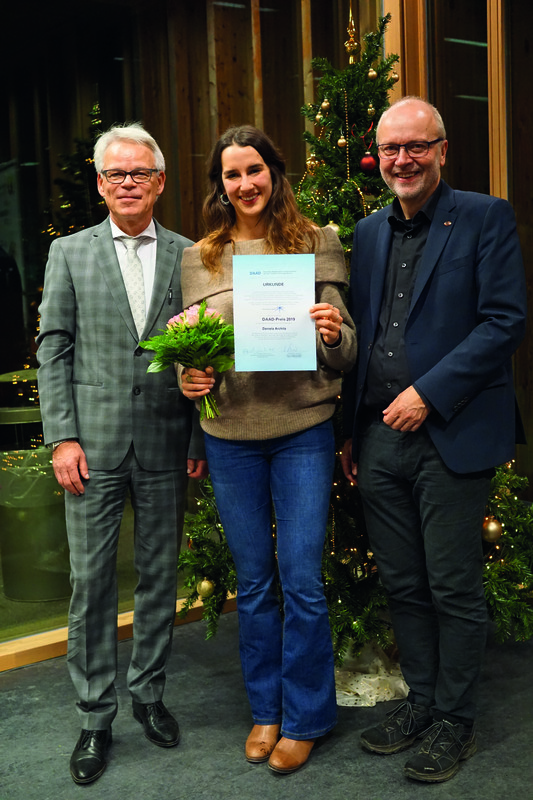 Around 120 students, coworkers, as well as professors gathered in the Christmas-themed cafeteria at Campus Burren. The highlight of the event was the awarding of a number of prizes to Aalen students, who advocate for the international exchange. The German Academic Exchange Service’s (DAAD) 1,000 Euro endowed prize for excellent performamce of foreign students went to Colombian Daniela Archila, a student from the bachelor degree program International Business Studies. She was nominated for the DAAD Prize 2019 by several professors.

In his laudation, Prof. Dr. Jürgen Strauß, who teaches International Business Studies at Aalen University, emphasized not only her outstanding academic performance, but especially her exemplary social engagement, since Daniela participates voluntarily both inside and outside of the University. The student took part in the Aalen University Buddy Program several times, in order to make the start of studies easier for other international students. She also supported the shooting of a promotional video for the Buddy Program, as well as the orientation weeks for exchange students, excursions, or intercultural seminars. Alongside her engagement at the University, Daniela Archila never forgot the people from her home. For six years and with the help of the WorldVision foundation, she supported the education of a girl from a poor family in Columbia. She provided new instruments and costumes for the performances of a music group of small children, who live on the Pacific coast of Columbia. In order to be able to also effectively help needy Columbian children in the future, the young woman founded the foundation „Fundación Arrebol“.

For the third time already, the charitable association „International Society Aalen (ISA)“ awarded prizes to internationally engaged students at Aalen University. Daniel Fritsche, recent graduate of the master program Technology Management, received the Prize »Buddy of the Year 2019« from Prof. Dr. Dirk Flottmann, Vice Chair of ISA. Thereby, he was honored for his unparalleled mentoring of international students, as well as through his repeated participations in the Buddy Program for young refugees.

A Guideline for Fellow Students

Student of the degree program Vision Science/Optometry, Fiona Wißmann won the prize „Sharing Experience from Abroad“. During her semester abroad at the University of New South Wales in Sydney, Australia, Fiona Wißmann not only professionally prepared her own experiences in her bachelor thesis as a guideline for the next students, but also made so-called „Explanatory Videos“ by her own initiative, so that other students in the future can view simple and compact video guides for planning a stay abroad. „With her explanatory videos, Fiona Wißmann, in the truest sense of the title, collected experiences abroad and now lets many of her fellow students profit from them,“ said Prof. Dr. Anna Nagl, academic dean of the master program Vision Science and Business (Optometry), who presented the prize. Both prize holders can rejoice about the prize money in the amount of 500 Euros each.

At the International Christmas Party certificates were also awarded to 28 students from Aalen University, the DHBW Heidenheim, and the PH Schwäbisch Gmünd for their successful participation in the Honorary Ambassador Program. As a part of this initiative of the Business Development Agency GmBH Region East Württemberg (WiRO) and the international offices of the four state universities in East Württemberg, international students have been trained as ambassadors of the region since 2017 through playful integration measures.

Numerous Guests from many Nations

The awarding of prizes was framed by an accompanying cultural program. A highlight was the performance of the University Choir „Campus Vocals“ under the direction of Stephanie Mader. „It was a beautiful atmosphere with numerous guests from many nations and different university groups,“ said Pascal Cromm, Diroctor of the International Relations Office. „In today’s fast-paced times, I think it is particularly important to pause in between, in order to honor people for their outstanding social engagement – in the hope that others will take them as an example,“ explained Cromm.