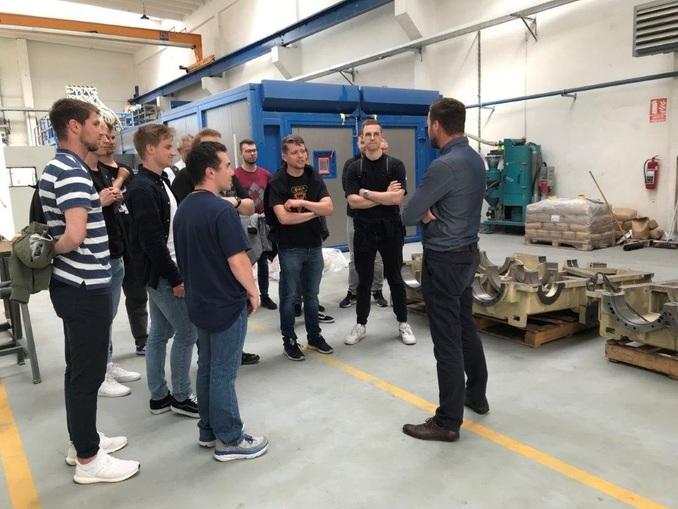 In the summer semester, students of the master's program "Product Development and Manufacturing" went on an excursion to Pilsen in the Czech Republic. Visits to companies such as the car manufacturer Škoda, insights into research at the University of West Bohemia, a tour of the brewery - students had a diverse program in which cultural exchange was not neglected. The excursion to Pilsen was a building block for the relationship in research and teaching between the two universities.

This semester, the master's program "Product Development and Manufacturing" at Aalen University embarked on an excursion to Pilsen. The trip was organized and led by Dean of Studies Prof. Dr. Markus Merkel: "We are happy to finally give our students the opportunity for intercultural exchange again." The invitation had long been extended by the University of West Bohemia in Pilsen, but could not be carried out because of the pandemic. At the start of the semester, the master's program was finally able to accept the invitation. The International Office of Aalen University contacted the companies in the Czech Republic promptly and efficiently, and the study department set up the agenda. Romana Suchá and Miloslav Kepka from the University of West Bohemia were on site to assist the excursion group.

Company tours at the automobile manufacturer Škoda and Wikov Gear were on the agenda as a highlight. Wikov Gear designs and produces drive solutions for the rail vehicle industry. The intercultural exchange naturally included a tour of the "Pilsener Urquell Brewery" as well. During a guided tour of Pilsen, which was named European Capital of Culture in 2015, the group was able to learn more about the old city.

Visit to the University of West Bohemia

In addition, the Aaleners visited the University of West Bohemia, where about 11,000 students are enrolled. Almost each of the nine faculties has its own building. The students from Aalen gained insights into the research activities and were able to exchange ideas in the huge cafeteria building.

At the end of the trip, Dean of Studies Prof. Dr. Markus Merkel and program secretary Manuela Henschel were pleased that all participants returned home with a multitude of positive impressions. The excursion to Pilsen was a first step towards expanding the cooperation, which has so far mainly taken place on a research level.

Prospective students have until July 15th to apply for the master's degree program in product development and manufacturing. More information can be found here.