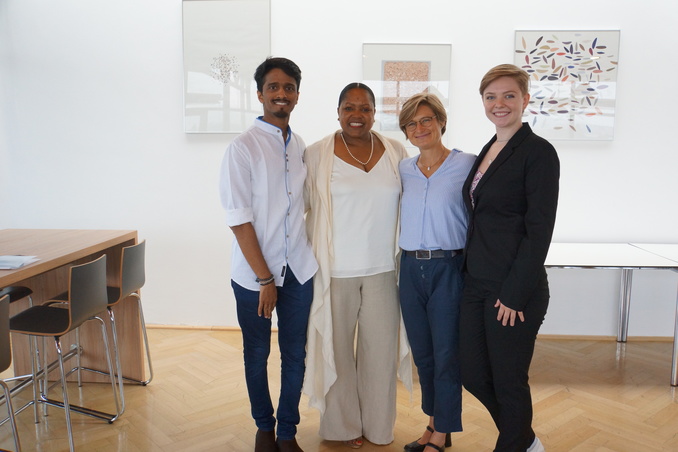 Sixteen international students at Aalen University from Argentina, Belgium, Brazil, India, Italy, Mexico, Portugal, Spain and the USA were honored as Honorary Ambassadors of the East Württemberg region during a ceremony at the District Administration Office last Friday and received certificates from the Deputy of the Chief District´s Executive Karl Kurz. Honorary ambassador status is achieved through participation in the East Württemberg Honorary Ambassador Program, which was launched in 2017 by the four state universities in the East Württemberg region and the business development agency Wirtschaftsförderungsgesellschaft Ostwürttemberg (WiRO).

The East Württemberg Honorary Ambassador Program is based on the knowledge that foreign students can only study successfully if they feel comfortable and integrated in their new study and living environment. By participating in various activities and interacting with many people, international students can quickly integrate into the university and society as part of the Honorary Ambassador Program. They get to know and appreciate the place where they study and live. This creates a deeper bond between them and the region - an important prerequisite for later assuming the role of honorary ambassador abroad.

International students are encouraged to participate in the following events: a German language course, non-curricular events at the local university, subject-related excursions, events organized by a professional or academic network, and events organized by local cultural and/or sports clubs. Student ambassadors are also expected to volunteer their time. More than 140 international students from over 30 countries and four continents have already participated in the East Württemberg Honorary Ambassador Program. The program is coordinated by the International Office at Aalen University. "There are only winners in this program. The students broaden their horizons, improve their language skills, meet new people and also gain better access to the local economy. The region and the universities benefit twice over - once when these open and creative young people are on site and share their culture and ideas with others, and again later when they act as honorary ambassadors for the region and the universities abroad," explains Martina Kübler, Deputy Head of the International Office.

The ceremonial awarding of certificates to the new student honorary ambassadors was carried out on behalf of the Chief District Executive Dr. Bläse by his deputy Karl Kurz at the District Office last week. In his speech, Kurz praised the courage of the students to go abroad and to deal with a new culture and language. He emphasized that the East Württemberg region is not only very attractive for international talents, but that they are also very welcome here. Kurz sees the ambassadors' task not only as making East Württemberg and Aalen University visible abroad. "Thanks to your intercultural competences and thanks to the understanding for other cultures, you have the best potential to contribute to international understanding and thus also to more peace on earth," Kurz said in his speech to the new honorary ambassadors. Another 10 international students of DHBW Heidenheim will be awarded with ambassador certificates this summer during a separate ceremony in the district of Heidenheim.