Prof. Dr. Miranda Fateri develops a new Transport System for the IndustryThe funding programme EXPLOR from the Kessler + Co. Foundation for Education and Culture supports the specialist for 3D-printing when putting together a research group. 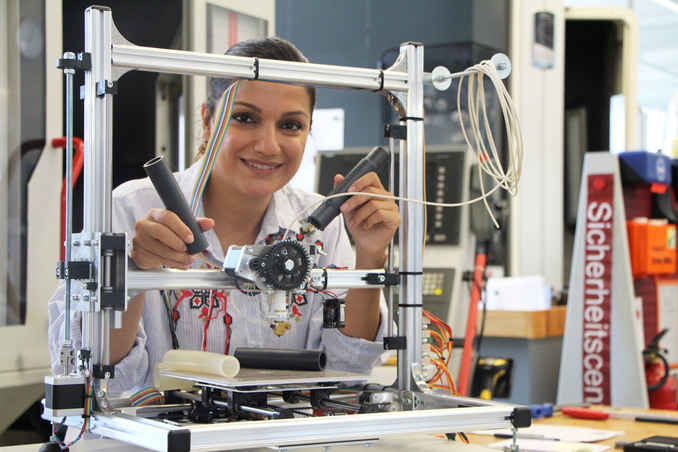 Prof. Dr. Miranda Fateri has devoted herself to 3D-printing. Currently, she is researching the perfect tubular form for a propulsion system, among other things.

Miranda Fateri has been a professor in the Faculty for Mechanical Engineering and Materials Science at Aalen University since October 2019. She has devoted herself to 3D-printing and, among other things, is currently developing a new type of cost-efficient propulsion system based on pressurised air, which can be used for transporting construction parts, for example. The project is now being supported with 40,000 Euros by the funding programme EXPLOR of the Kessler + Co. Foundation for Education and Culture.

How does one transport construction parts from point A to point B? The obvious answer is with a conveyor belt. However, this requires a lot of space, and precise movements are not possible. For this reason, Prof. Dr. Miranda Fateri is working on a system powered by pressurised air, a so-called pneumatical actuator. Together with  Prof. Dr. João Pedro Falcão Carneiro from the University of Porto in Portugal, she is researching a new transportation system, which can move the construction parts more precisely. The basis is using a hose, which directs movement. The hose is then pressed together by two rollings. This way, the air is pushed through the hose with a high level of pressure, moving the rollings. “If we attach a robotic arm to the rollings, we can move parts for production like a car door directly to where they are to be mounted”, explains Fateri.

Until now, hoses have only had limited durability, because the high level of pressure and tightly fitted rolling require a lot from the material. For that reason, Fateri is researching new types of hosing that are being designed and produced as prototypes through 3D-printing at Aalen University. “The students are modeling different types of hosing with computer-aided-design (CAD)“, says Fateri regarding the approach. “We’re working out the perfect hose geometry through the connected simulations”.

In contrast to electrical systems, pneumatical systems have a number of advantages: “The system functions with air, which makes the application very cost-efficient. Because the hoses are flexible, construction parts can also be transported over curvy paths”, explains Fateri. This would be useful for the automobile industry, for example. Here, there have already been conversations with a producer. But at the end of the day, the fundamental research is the most important aspect for her.

In order to promote the project, Fateri is now being funded through the programme EXPLOR from the Kessler + Co. Foundation for Education and Culture. They support new professors at Aalen University in checking their ideas quickly and without bureaucratic efforts in terms of their feasibility. With the funding, Fateri can employ a fellow researcher, as well as procure a small 3D-printer to work with silicon-based materials. To build on that, there will be a new testing centre built at the university, in order to test the durability and capacity of various hose geometries. Until now, all testing has taken place at the cooperating University of Porto.

Miranda Fateri discovered her love of 3D-printing in her studies. The born-Iranian studied mechanical engineering at the Sharif University of Technology in Tehran, and came to Germany with the help of the internationally-oriented degree programme. After receiving her Master’s degree at FH Aachen, she investigated 3D-printing methods for glass powders to create jewelry or contact lenses with her doctoral thesis at Aachen University. At the same time, she experimented 3D-printing with artificial moondust. “I was always fascinated with the stars and outer space”, says Fateri, who had dreamed of being an astronaut as a child. Through her work, the European Space Agency (ESA) and the German Aerospace Center in Cologne became aware of her, where she continued researching 3D-printing moondust after her doctoral thesis. “If we want to live on the moon for a long period of time, we are going to need a way to build construction parts there”, says Fateri. She carefully stores prototypes in a locked box: nuts and screws and even a small miniature space station. A highlight of her time there? In 2018, she was able to participate in a parabolic flight and experience zero gravity. “It was super, it’s an unbelievable feeling!” reports Fateri, and beams with her whole face.

Since October 2019, the 37-year-old has been a professor for additive manufacturing and digitalisation in production at Aalen University, and lectures here in the field of additive manufacturing and engineering mechanics. “I love it! As a professor, I can continue researching and I meet students who are so talented and have great ideas – that impresses me”, gushes Fateri.