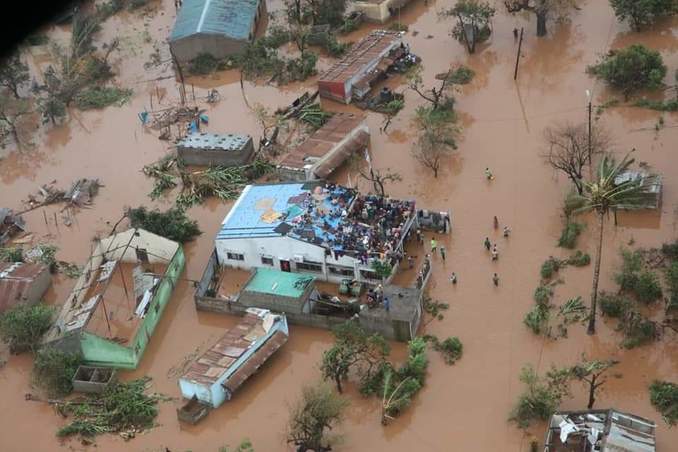 With the goal of rebuilding the health center at the Catholic University of Mozambique in Beira, the city of Aalen, through the mayor and local council, university, district, the director of the Ostalb-Clinic formed a coalition with the German-Mozambican Society. In order to found medicinal provisions in a functional building with medical equipment and medicines, around 300,000 Euros are needed.

Last summer, Aalen University arranged a cooperation for teaching and research with the Catholic University of Mozambique in Beira.”Since then, we have had a friendly partnership. The pictures from there that we’re seeing now, and the on-site reports are horrifying. Our partners need us now, and are dependent on our help and support from Ostwürttemberg. Please help too”, appeals Professor Gerhard Schneider, president of Aalen University.

Mayor Thilo Rentschler and the local council of Aalen showed shock: “It makes us all very sad to see how the people in the region around Beira have to fight for their lives. People, who belong to some of the poorest in the world. Our friendship with Vilankulo is established as a mid-term educational project. Now we can and should help immediately with donations to alleviate the emergency. Please help us, and many thanks!”

The Catholic University of Mozambique in Beira was destroyed to a great extent. The new building for the medicinal faculty, started in February, is completely devastated. The health centre is damaged and closed. For over ten years, a team of doctors from the German-Mozambican Society gave lectures to honorary students and doctors at the Cath. University in Beira, under the leadership of Professor Ulrich Solzbach, the medical director of the Ostalb Clinic in Aalen. With an idealistic attitude, qualified medicinal provisions with laboratories, ultrasound, ECG, apothecaries and much more were built. But now everything has been destroyed, flooded under a meter of water.

“Right now in Beira, the main focus is staying alive. We must first rebuild the primary care functions. The people need clean drinking water and a roof over their heads, or else diseases will begin to spread. For that reason, we absolutely must rebuild the health centre. Patients cannot be handled in the middle of a mass of water”, says Professor Ulrich Salzbach, medical director of the Ostalb Clinc and longtime Mozambique expert.

The scope of the cyclone „Idai“ and the aftermath of its destruction are gradually being made clear in Mozambique. After current investigations, hundreds of people have been listed as victims, but this number could dramatically increase. Over 100,000 people have lost what little they had. The harbour city Beira with 500,000 residents and nearly 450 km north of Aalen’s sister city Vilankulo, was especially affected. Even a week after the cyclone, there is no power supply, adequate drinking water and food. All communication methods have been affected. The region can only be reached by air.

The German-Mozambican Society e.V. is accepting donations, and will issue donation certificates: