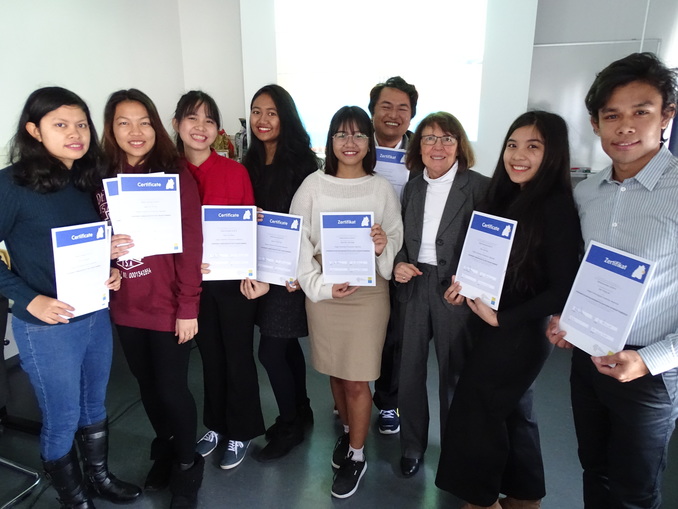 Students from Myanmar at Aalen University recently received the title of honorary ambassadors of East Württemberg, and were recognized for their cultural and economic interest in the region.

Through various means of integration, the universities of East-Württemberg develop exchange students into ambassadors of the region. This education is a shared project of the Regional Economic Development Corporation in Ostwürttemberg (WiRO) with the international offices of Aalen University, Baden-Württemberg Cooperative State University (DHBW), the University of Design Schwäbisch Gmünd and the University of Education Schwäbisch Gmünd. Representing district chief executive Klaus Pavel, the director of WiRO, Dr. Ursula Bilger, awarded 24 students from DHBW and eight students from Myanmar of Aalen University the ambassador certificate.

Around 900 exchange students are currently enrolled at the four public universities of East-Württemberg – skilled labour with high potential for the numerous internationally active companies in the region. Many exchange students acquire a liking for East-Württemberg and decide to start their careers at local firms. The strong professional opportunities, the intercultural atmosphere and a distinct welcoming culture all make the region attractive. The Welcome Office East-Württemberg, founded in March last year, additionally strengthens this.

But students who decided to return home can also assist in developing the East-Württemberg region, as ambassadors for the region. They can advertise the advantages of the region to the whole world through their experiences with culture, free time or sports, as well as in the fields of economics and career opportunities, and maybe they decide to return to East-Württemberg at a later point in time.

The Ambassador-Programme of East-Württemberg intends to make it possible for international students to quickly integrate into their new living environment. Because only those who feel comfortable can also successfully study. Through the various activities, students meet with people from the region. As they begin to value their studies and life here, a deeper bond forms – which leads to their role as ambassadors for East-Württemberg. The students collect stamps as they participate in activities for the university, cities and region, similarly to a real passport. Whoever brings enough stamps or photos receives a certificate of honorary ambassadorship during a festive ceremony held by the district chief executives.

The programme has been running since 2017 and, as part of the industry campaign “Astonishing East-Württemberg”, it is also supported by the districts, the district towns and the economic networks and organisations. In total, 58 exchange students from Argentina, Belgium, Costa Rica, France, Italy, Croatia, Columbia, Myanmar, Nepal, Russia, South Africa, the Czech Republic, Hungary and the USA have met the requirements for earning the certificate. The special success of the certificates this semester is due in part to the merit of the 2015-2017 project MINGALABA of the Baden-Württemberg Scholarship, in the framework of the BWS plus programme, which brought about new cooperation between universities in Baden-Württemberg and Myanmar. The students were very excited about the honour. Further information about the project can be found at TIE-Talents.